My review of a biography of AR Rahman is here. The number of “hits” on my blog has just crossed 78,000. I am happy. This does not include hits to my old blog. If you are a bit confused, checking … Continue reading →

Why ‘My Name is Rajinikanth’ is a utter disaster

The Name Is Rajinikanth was published in 2008. I bought the book six months ago, almost. I have read it over the last week, finishing it seven years after publication. I bought the book from a store in Express Avenue in Chennai. I guess I can’t change the fortunes of how well the book will do in the initial market, which would have been saturated by now. But here’s my two-bit anyways.

The book costs Rs 495 and has 379 pages. Om Books International has published it. The book ends with describing the success of Shivaji and has a small note on three other movies. 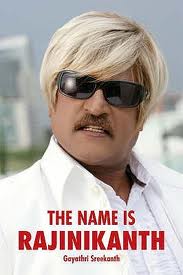 k cover of the book has quotes from former Tamil Nadu chief minister M Karunanidhi, actor Kamal Haasan and Rajinikanth himself. These quotes are meant to propel sales of the book, but after perusing it I find them unjustifiable.

Gayanthri Sreekanth, the author, doesn’t bother to source any of the information. That is the glaring lacunae that bothered me while reading the book. Rajinikanth hasn’t been directly quoted , which is weird.

There is a conversation between gods, blessing him and foretelling the future, at the time Rajinikanth was born. Why this tamasha?

Gayathri also romanticises the poverty in the actor’s life till be finds a break in the movies. The poverty must have been there, but isn’t in the least bit unusual as thousands converge on Chennai, hoping for future in cinema. The author cuts between this terrible past to the life Rajinikanth enjoyed during the shoot of Thillu Mullu. The author also describes in great detail his first meeting with Lata. However, it remains unknown whether the author met the actor’s wife.

Thankfully, the book doesn’t avoid writing about Rajini’s drinking and smoking, and his psychotic breakdown. I am lead to think that the author records these events as they are already in the public domain. One event has the actor purportedly going to a whore. Another records his demand for divorce from his wife. He later changes his mind after director K Balachander, who writes the book’s foreword, intervenes.

The book didn’t satiate my interest in the actor’s life. The author is given to hyperbole and this bugs me to no small extent. The film world is portrayed as a benign place, which from personal experience I know to be completely wrong. The infantile egos in the business must have caused trouble, but the author never takes you behind the scenes.

The standards set when it comes to writing a biography are quite high in the west. The way biographies of Bob Dylan, Steve Jobs and Albert Einstein were written is a case in point. We need to play catch up. Otherwise the details of even the life of someone like Rajinikanth will remain elusive. I beg the actor’s fans to stay away from the book.